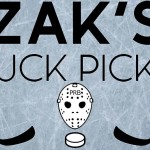 Welcome to Zak’s Puck Picks!! I’m very excited to be here with Cash with Flash Best Bets and working with all of these terrific handicappers. Here’s hoping that I can find some value for you.

I’m also excited to be co-hosting a podcast with Phil “Cash with Flash” Naessens. The weekly podcast is called Hockey Picks Podcast and we dropped the first episode yesterday. We made our picks for each first-round NHL matchup and I hope that you will give it a listen.

Barry Trotz was behind the Washington Capitals bench two seasons ago when they won the Stanley Cup. Now he is the bench boss of the New York Islanders and appears to have found the solution to beating his former team. The normally defensive Islanders, have put nine pucks passed Braden Holtby over two games, while only allowing four. I think the Islanders take a stranglehold on this series today.

The Calgary Flames find themselves up two games to one in this series despite not playing as well as they could in game three. Cam Talbot stood strong stopping 36 pucks the Dallas Stars sent his way. Dallas has seemed to have misplaced it’s scoring touch that it found in game two. The Dallas powerplay has scored two goals in the first three games. The issue is, they have also given up two short-handed goals. You aren’t going to win a series with those numbers. The Flames need to see more from their top unit who have had low production this series and I think they will regain their ways today.

The first two games of this series were a Jekyll and Hyde scenario for the Philadelphia Flyers. Game one, the Flyers team defensive game was on point, seemingly cruising to a three to one win. The second game was completely dominated by the Montreal Canadiens easing their way to a five to the nothing shutout victory. I am not in any way going to try to predict who wins this game due to the wild swings so far. My thinking however is that Carey Price continues his fantastic puck stopping in the crease and the Flyers find some of that defensive ability that lacked in game two.

In game two of this series, it looked as though the St. Louis Blues were finally back to themselves, taking the game to overtime. Vancouver Canucks captain Bo Horvat scored the overtime winner to increase Vancouver’s series lead to two games to zero. I think the progress seen in the Blues game will continue into game three. It will be interesting to see if St. Louis decides to play puck stopper Jake Allen in game three, who looked really good vs the Dallas Stars in the round-robin to switch things around.

Zak’s Puck Picks concludes to take the St. Louis Blues on the money line at (-130)

Cash with Flash Free NBA Play of the Day!!